Thanks to the Guardian online for this one... 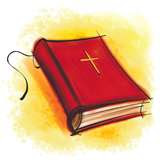 Education secretary will send a copy of the Bible to every state school after donors club together to save £370,000 initiative

Michael Gove's Bible project is said to have run into trouble in January when the prime minister reportedly told him to avoid using taxpayers' money. Photograph: David Jones/PA
Millionaire Conservative party donors have clubbed together to rescue a plan by the education secretary, Michael Gove, to send a copy of the King James Bible to every state school in the country.

Gove hoped to mark the 400th anniversary of the Bible's completion by donating a leather-bound copy, written in 17th-century English, to all primary and secondary schools by Easter. However, his plans were said to have run into trouble in January when government sources reported that David Cameron had told Gove to avoid using taxpayers' money for the £370,000 initiative.

At the time, Gove had not found private philanthropists to sponsor the enterprise. It has now emerged that leading Tory donors – mostly former hedge fund and private equity bosses – are footing the bill. They include Lord Stanley Fink, the former co-treasurer of the Conservative party who was once chief executive of the listed hedge fund Man Group. Fink, a life peer, has donated more than £2.3m to Tory projects.

Lord Robert Edmiston, a motor trade entrepreneur who gave more than £3.2m to the Tory party between 2000 and 2010, has also sponsored the Bible project. The life peer is an evangelical Christian who set up the charity Christian Vision. Others who have funded the scheme include Ramez Sousou of the private equity firm TowerBrook, who has also given support to Cameron's party, Michael Farmer, the Conservative party co-treasurer and City financier who has donated more than £3m to the party, and Lord Harris, a regular donor to the Conservatives and the chairman of Carpetright.

The Liberal Democrat donor Paul Marshall, a hedge fund boss and committed Christian, and his wife have also donated funds for the scheme, as has Sir Peter Lampl, the founder of a private equity firm who is an education philanthropist. A spokeswoman from the Department for Education said no public funds would be needed for the project. The Bibles, which state on the spine that they have been presented by the secretary of state for education, have been sent to schools this week.

Teachers have greeted the initiative with a mixed reaction. A primary school teacher from Sheffield, who did not want to be named, told the Guardian the Bible, which arrived on Monday, would "stay in the headteacher's office on a shelf".
"I work in an inner-city primary school and there's no way that our children are going to be reading and understanding the kind of English this Bible is written in," he said. "I have nothing against celebrating the 400th anniversary of the publication of the King James Bible, but we really could have done with some more story books."
Another teacher, who did not want to be named, wrote on the forum of the Times Educational Supplement that pupils in her school – a Church of England primary – were presented with their own Bibles. "I feel the inscription on the side is more to do with this project than the actual 'gift'," she said. "Privately funded or not we could all have used the money more appropriately to our own school setting."
The Bibles, which have been published by the Oxford University Press, are accompanied by a letter from Gove.

"I believe it is important that all pupils – of all faiths or none – should appreciate this icon and its impact on our language and democracy," it says. He adds that the gift has been funded through the generosity of private sponsors "who share my view that this book has a unique place in our nation's history and culture".
All schools are expected to have received their copies by the end of the month.