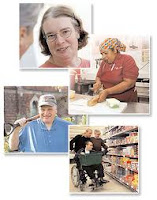 The responsibilities of carers mean they are more likely to suffer from ill health; through stress and depression, poor self-care or physical injuries due to incorrect moving and handling. Despite this, fewer than 10% of carers are identified by their GP practice and offered appropriate support.
In this article, published by the CQC, there is an explanation of what is meant by the term ‘carer’ and examples are given of good and outstanding care for carers in general practice.

One of the reasons many carers are not identified by their GP practice is confusion around how to define term ‘carer’.
A carer is a person of any age (including children) who provides unpaid support to a partner, relative, friend or neighbour who couldn’t get by without their help. This could be due to old age, frailty, disability, a serious health condition, mental ill health or substance misuse. Parents of children who are disabled or who have a serious health condition are also considered to be carers.
There is a difference between a carer and a care worker or care assistant who is paid to provide care. This can be confusing, as some carers receive statutory payments (for example Carer’s Allowance) or a direct payment for their caring role. However, even when carers are in receipt of such payments, they are still considered to be carers.
As many practice teams know, carers may not readily identify with the label ‘carer’. Instead, they see themselves as someone’s partner, relative or friend who is simply “doing their best” to help someone they care about. For this reason, the question “Do you look after someone?” can be a more effective opening question than “Are you a carer?”


What does good and outstanding care for carers look like?

Many organisations including the RCGP, Carers Trust, Carers UK and local commissioners have described initiatives practices can use to improve the care they give to carers. Some common themes include:

What examples of outstanding care for carers have we already identified in our inspections?

The practice was proactive in its support for carers. For example, the computer system alerted GPs if a patient was a carer. The practice provided written information for carers to ensure they understood the various avenues of support available to them. The practice had links with a carer support worker and ran a carers group, which provided access to advice and information. This had resulted in the practice winning a local carers award for the support provided to carers in 2006.


A semi-rural practice with 9,500 registered patients:

The practice had a register of carers and a member of staff carried out the role of 'carers coordinator'. This staff member made annual contact with every carer on the register to ensure they were receiving the care and support they required. The carers register was then updated based on this contact.


A practice in a small town serving 14,000 registered patients:

Carers Trust has a range of best practice examples of outstanding care for carers. A recent case study provided by Herefordshire Carers Support, who have established a network of GP practice Carers Leads across the county, is below. In addition to increasing the number of carers identified and referred to their local carers service, the network has also encouraged practices to work collaboratively to support carers in the community:

“During Carers Week this year the Carers Leads from three practices worked together to hold an information event. All three surgeries contacted their carers and invited them to the event which featured speakers, info stands and Q&A sessions throughout the morning, ending with a speech by Baroness Jill Pithkeatly, the Herefordshire Carers Support Patron. It was a big success and a great example of surgeries working together to provide a service for their carers.”
Posted by Words Worth Reading at 13:30